The type of government in Canada is designed to function in the Westminster style of federal parliamentary democracy within a constitutional monarchy. Even though the Queen of England is the formal head of state, her prerogatives are mostly limited to giving a royal assent to laws voted by the Parliament. The royal obligations are carried out by the Governor General of Canada who is a Canadian appointed by the Queen on proposal of the Prime Minister.

The Canadian Parliament consists of the Queen (Head of state), the Senate that is appointed and the House of Commons which is elected by simple plurality.

The Federal Government is responsible for international policy, defence, immigration, criminal law, border control. The Provincial Government and the Queen’s representative (the Lieutenant Governor) are responsible for healthcare, education, registration activities and for the budget of the province. 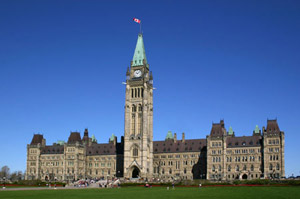 The 22nd Prime Minister of Canada, Stephen Harper, is born in Toronto and holds degrees in economics from the University of Calgary. His political career began in 1993 when he was elected to the House of Commons. In 2003, he was one of co-founders of the Conservative Party of Canada and won party’s leadership in the 2004 federal election.

The Conservative Party of Canada or the Tories, is from the right political spectrum and although young, holds 37.6 percent of the vote in the most recent elections. The party was formed by the merger of the Progressive Conservative Party of Canada and the Canadian Alliance. In 2003, its leader Stephen Harper proclaimed that the party was the home of all types of conservatives: social and economic conservatives, Red Tories, and democratic reformers.

The Liberal Party of Canada or the Grits, is the oldest party in Canada from the centre-left. It forms the Official Opposition since the 2006 election. The Liberal Party has won the power more often than any other party in the developed world. Since May 2009, its leader is Michael Ignatieff. He has held academic posts at the top ranking educational establishments such as Harvard University and University of Oxford prior to entering the political field in 2006.

The Bloc Québécois is a federal political party aiming to protect Quebec's interests on a federal level but also to promote its sovereignty. Its aim is to organize the political separation of Quebec from Canada and makes campaigns only within the territory of the province. Founded in 1991, the Block won 49.3 percent of the vote in Quebec at the 1993 federal election. The vote entitled the oppositional party to 54 seats in the House of Commons. Bloc Québécois suffered a setback at the federal election in 1997 but still obtained 44 seats. By now, it is the third largest fraction in the House of Commons.

The structure of the Canadian population is variable. More than 80 percent are born in the country with those born outside growing in number westward from Newfoundland. Citizens of British and Irish origin make up about 28 percent, of French origin – about 23 percent. Another 26 percent of the population are from mixed backgrounds. Immigrants from Asia, Africa, and the Arabain Peninsula make up 6 percent of the population and Amerindians and metis - 2 percent.