The song O Canada has been the national anthem of Canada since July 1, 1980. The patriotic lyrics were written by Sir Adolphe-Basile Routhier - a poet and judge. The music of the anthem was composed by Calixa Lavallee in 1880. The original poem was in French and there are several literal translations in English but the official English version of the lyrics was written by Robert Stanley Weir in 1908.

Canada is officially a bilingual country and both languages - English and French - have equal status in all federal institutions. However, English is the mother tongue of approximately 60 percent of the country's population while French is the mother tongue of 24 percent of the Canadian citizens. The Francophone Canadians live mainly in Quebec but there are French-speaking people in New Brunswick, Ontario, Alberta, and Manitoba. 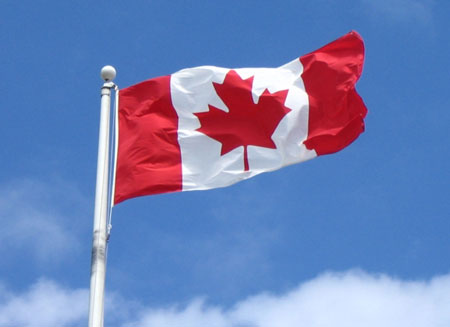 There are three types of universities in Canada - major, mid-sized and small ones. Universities are located across the territory of the country, with at least one educational establishment in every province. They educate thousands of students in undergraduate, graduate, and postgraduate programs. Canadian degrees are recognized around the globe and regarded equivalent to those from Commonwealth and US institutions. University tuition fees for full-time students vary from $2,000 (for Canadian citizens) and $7,000 (for international students) up to $18,000 for Canadians and $20,000 for foreigners. Conducting 35 percent of Canada's research, worth about $10.2 billion, universities are the largest performer of research in the country, besides the industry.

One of the most popular symbols of Canada and its national emblem, the Maple leaf appears on the coins and the national flag. The Indians used the sap of the tree long before the continent saw the ships carrying immigrants. It is considered that the maple leaf turned into a Canadian symbol in the 1700s. The Beaver is another major symbol of the country and has been the emblem of Canada since March 24, 1975. Today, the Beaver is depicted on the back of 5-cent coins and on a few provincial coats of arms. And besides, the Nova Scotia Association of Architects celebrates the National Beaver Day on the last Friday of February.

As a matter of fact, there are thousands of natural and manmade attractions in Canada, but the top ten gained worldwide popularity are: Niagara Falls, Northern Lights (Aurora Borealis - an amazing colorful dance of air), CN Tower, the second highest building in the world, Cabot Trail, a unique and unforgettable adventure, and Old Quebec City, one of the oldest fortified cities in North America. Banff National Park is the oldest park in Canada and a divine chain of mountains, situated west of Calgary. Peggy's Cove, one of the major attractions in Nova Scotia, is among the most remarkable lighthouses in the world. Bay of Fundy is a kind of a mediator of two provinces that boosts the highest tides in the world. In Stanley Park, visitors can see the rumored world's biggest cedar and the National Geographic tree. Parliament Hill, situated on the banks of Ottawa River, is the symbol of the Canadian democracy.
Find here more interesting facts about Canada.

When does Canada celebrate Thanksgiving?
What is the national anthem of Canada?
Where is Niagara Falls located in Canada?
What are the official languages of Canada?
What holidays does Canada celebrate?
What are major attractions in Canada?
What is the national animal of Canada?
How many Canadians speak French?
When does Canada celebrate its national holiday?
What is Social Insurance Number SIN
What International Organizations is Canada Member of
Top Charitable Organizations in Canada
Top Canadian Grocery Chains
Canada Best Resorts for Winter Activities and Relaxation
How to Get a Driver's Licence in Canada
What are the Top Canadian Airports
How to Apply for Canadian Passport
How to Block Telemarketers in Canada
How to Start a Small Business in Canada
How to Register a Trademark in Canada
How to Get a Tourist Visa to Canada
Top Canadian Newspapers
Top Canadian Magazines
How to Register Canadian Domain Name
Canada Post
MLS in Canada
How to Import a Car From USA to Canada
VIA Rail Canada
How to Buy Prescription Drugs in Canada
How to Marry a Non-Canadian in Canada
How to Get a Firearm License
Top List of Events in Canada’s Social and Cultural Evolution
How to Adopt a Child in Canada
Top List of Resorts in Canada
The New Super Visa for Multiple Entries and Longer Stays
Top Canadian Golf Courses for Bogey and Professional Players
A First Aid Kid and Emergency Plan to Prepare for Natural Hazards
The Toronto Zoo as the Home of Species from Different Zoogeographic Regions
Popular Canadian Summer and Winter Sports
Canada’s Wonderland: Thrilling Rides, Dinos, and Family Fun
The Calgary Stampede
Canada’s Top Athletes Brought Hockey, Racing, and Skating to New Heights
The New Aquarium in Toronto: a Unique Underground Attraction
Lacrosse and Ice Hockey as Sports That Stir up National Pride
How to Visit Canada as a Budget Traveler
Famous Buildings and Unique Architectural Solutions in Canada
Finding Free Entertainment for Your Kids
Canadian Women of Influence, Entrepreneurs and Executives
Mistakes to Avoid when Visiting Canada
Flower Delivery: from Spring Garden Bouquets to Unique Arrangements and Gifts