The largest French-speaking city in the Western Hemisphere, Montreal, is located 150 km east of the country's capital Ottawa. It is the second largest city in Canada and the largest in Quebec. Furthermore, Montreal is a leading commercial, financial and cultural centre. Situated on a picturesque island bearing the same name, in a place where the rivers St. Lawrence and Ottawa merge, Montreal is a modern, colourful and yet, not the typical North American metropolis.

Unlike most American cities which sprung up just 100-200 years ago, Montreal has been inhabited for thousands of years. The territory was populated by Native American tribes when the first European, Jacques Cartier set foot on the bank of St. Lawrence River and claimed the land in the name of France. Cartier was followed by Samuel de Shamplen who, in 1611, founded the first trading post on an island named Ville-Marie (the future Montreal). A century later, the territory fell in the hands of the British, and the settlement was given its present name. During the centuries to follow, colonists from Great Britain settled alongside the French. Immigrants from all over the world followed suit and the towns they founded continue to flourish up to present.

Montreal has a humid continental climate, which varies throughout the year. The city is known for its snowy and chilly winters. It usually starts snowing in November and the snow stays till the end of March. The average temperatures in January are between -13° to 5°C. The summers are mild and sunny, with average temperatures in July between 18°- 27°C. Quebec is relatively wet region with annual precipitation of rain reaching about forty inches. 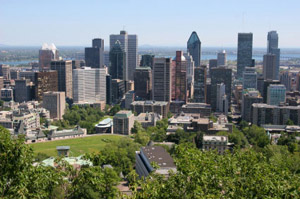 The city registered a total population of 1,906,811 in 2009, and the entire metropolitan population numbered 3,814,700. Montreal is a melting pot of various ethnoses and languages, and the majority of its residents are of British, Irish, and French origin. Montreal is the home of many visible minorities, defined as persons of non-Caucasian race and other than Aboriginals. The visible minorities are represented by Jewish, Moroccans, African Americans, South Asians, Latin Americans, Chinese, Greek, Arab, and Italians, among others.

As the cultural centre of French-speaking Canada, Montreal’s population is predominantly francophone. However, English is also widely understood.

Having diverse and intensively developed industries and a strong service sector, the economy of Montreal, based on GDP, is second only to Toronto. Today the city is the home to companies and organizations such as Royal Bank of Canada (the country’s largest bank), Air Canada, ICAO, Bombardie, Alliance Films, and others.

Montreal will conquer with its romantic and elegant look, green parks, abundance of flowers and a blend of architectural and natural sights. The old city attracts with its beautifully restored old buildings and cobbled streets, the magnificent Notre-Dame basilica, McGill University, Jacques Cartier square (the city’s most famous landmark), the Olympic complex, and the green jewel of the city - Mont Royal Park.

The new part of Montreal offers a completely different world with its shiny skyscrapers, small shops, large chain stores and mega malls, museums and theaters, and thousands of restaurants and bars.