The Canadian Shield is one of the largest geological formations in the world, stretching from the Arctic Ocean to the Great Lakes. The area covers northwestern, central, and eastern Canada and extends over parts of New York, Michigan, Wisconsin, and Minnesota. In Canada, the shield extends over most of Ontario, Quebec, and Labrador. It is a region extending from Nunavut to Alberta, with 5 subsections – James, Hudson, Davis, Kazan, and Laurentian Upland.

Topography
The region is dominated by crystalline rocks that are the result of erosion, mountain building, depression, and uplifts. The rocks are metamorphic, i.e. marbles and schists, and igneous, including basalts, diorites, and granites. The North American continent was covered by glaciers during the Pleistocene Era, and weathered rock occurred as the result of the movement of minerals and landmass. The formation is 3.96 billion years old and consists of sedimentary basins, terranes (crustal blocks), and collages of Archeozoic plates. The area is dominated by swamps, lakes, and rocky hills.

Natural Resources
The Canadian Shield is a source of silver, gold, uranium, and other minerals. Zinc, copper, nickel, and iron are also found here. Mining towns such as Sudbury are scattered throughout. Some 140 mining sites have been established, but when a mine closes, the population migrates because the town becomes useless.

Other Industry Sectors
Manufacturing is of limited importance. Farming is not a major sector because the soils are thin and boggy, and the growing season is short. The logging industry is well developed, with river transport used to ship the logs. Minerals, forestry, and other raw materials and products are shipped from Hudson’s Bay, with larger volumes transported during the summer months. The Canadian Shield also offers opportunities for recreation such as snowmobiling, skiing, fishing, and boating. Other activities include horseback riding, canoeing, water skiing, camping, cycling, and many others. Trapping and hunting are still a popular way to make a living. 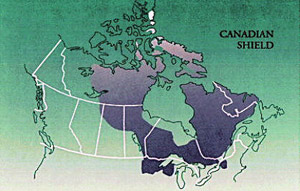 Among the major cities in the region are Timmins, Sudbury, Thunder Bay, Thompson, and Flin Flon. Sudbury, Ontario has a population of about 160,000 residents, which makes it the most populous city in the northern part of Ontario. About 1/5 of the population is employed in manufacturing, including mining, and the rest – in the service sector. Thompson, Manitoba has a population of close to 13,000, and mining is the most important industry. Refining, smelting, milling, and extracting of nickel are a major source of employment. The retail sector is also well developed, represented by grocery stores, car dealerships, travel agencies, and stores. Generally, the region has a low population density because of the transportation system, topography, and weather conditions.

Flora and Fauna
The central parts are dominated by white spruce, trembling aspen, balsam poplar, and black spruce. Lichens grow on the rocks. The area is the home to the American black bear, Woodland caribou, moose, grey wolf, snowshoe hare, and other animal species. The thin soil is not suitable for trees that have a deep root system.

Protected Areas
There are several protected areas – the Aiguebelle National Park, Pukaskwa National Park, Wabakimi Provincial Park, and others. Wabakimi offers plenty of opportunities for recreation, including vacations, log cabin retreats, fly-in fishing trips, and many others. Located near Armstrong, the park is the largest in Ontario. The area can be accessed by railway, float plane, and canoe. The Aiguebelle National Park is the home to many wildlife species – osprey, heron, mink, beaver, moose, and many others. Fishing is prohibited because the lakes are inhabited by lake trout and speckled trout. The park in found in Quebec and between the watershed of the Atlantic Ocean and Hudson’s Bay. The Pukaskwa National Park offers plenty of recreational activities such as river and coastal paddling routes, hiking trails, cove campgrounds, and many others. The park is located in the Thunder Bay District, Ontario and is the home to a diversity of wildlife species such as the peregrine falcon, mink, skunk, lynx, and many others. Rivers in the Pukaskwa National Park are the Willow, White, Swallow, North Swallow, Cascade, and Pukaskwa Rivers.