The Canadian Prairies are known as the breadbasket of the country and cover regions in Saskatchewan, Manitoba, and Alberta. The Prairies also extend through states in Mexico and the United States and represent around 5 percent of Canada’s total land mass. The Central Prairies encompass southern Manitoba, the lower regions of Saskatchewan, and most of Alberta.

Regions and Plant and Animal Species
Today, the area is mainly used as farmland. Manitoba was covered by tall-grass prairie in the past while mixed-grass prairie extended from Alberta and Saskatchewan to central Texas. The land area is covered by deciduous forest (3 percent), rangeland (27 percent), and cropland (70 percent). The ecozone is divided into 7 regions - Boreal Transition and the Lake Manitoba Plain, Aspen Parkland, Fescue Grassland, Moist Mixed Grassland, Cypress Upland, and Mixed Grassland. The Lake Manitoba Plain is characterized by gleysolic soils that support sedge and willow species. The area is covered by clays, silts, and sands to the south and glacial till to the north.

The Boreal Transition region is covered by farmland and deciduous forest. Represented species are tamarack, black spruce, willow, and sedges, as well as balsam fir and white spruce. The region is the home to animal species such as the snowshoe hare, coyote, beaver, moose, and white-tailed bear. The Aspen Parkland is an ecoregion with cold winters and short summers. It is the home to the North American beaver, squirrels, foxes, ruffed grouse, and hairy woodpeckers. The forest wetlands are covered by willow, Black spruce, marshes, fens, and bogs. Fescue Grassland is characterized by mild climate and streams, ponds, and sloughs. It is the home to species such as the sage grouse, ground squirrel, rabbit, and coyote. The Moist Mixed Grassland region comprises areas dominated by deciduous shrubs and wheat and spear grass. Cypress Upland comprises diverse habitats, from stark escarpments to slopes and pastures. Mixed Grassland’s saline soil supports greasewood, wild barley, and alkali grass communities. 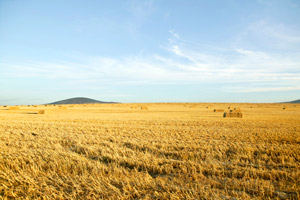 Climate and Soil
The Canadian Prairies experience humid continental and semi-arid climates. Rainfall varies considerably from season to season. The winters are cold while the summers are usually dry and hot. Scientists predict that the Prairies will experience extreme weather in the future, including floods, hail, and torrential rains. The region supports different soil types, including black and brown.

Lakes and Rivers
Among the larger rivers in the Canadian Prairies are the Red Deer, Bow, and Oldman rivers, all of which are tributaries to the North Saskatchewan and South Saskatchewan Rivers. Some rivers, including Peace, Smoky, and Athabasca flow into the plains of the province of Alberta. Lake Winnipeg is also found in the Prairies. It is the largest in southern Canada and the third largest in the country.

Industries and Sectors
Mining, gas, and oil production, forestry, and farming are the main industries. While farmers represented about 50 percent of the total population in the 1930s, today, this figure has dropped to 10 percent. This is not surprising given that the urban population is 81 percent today. The main crops are pulses, oilseeds, grain, and other forage and field crops. Domesticated animals include turkey, chicken, horses, swine, and dairy cattle. The secondary and primary industry sectors are focused on the production of petrochemicals, chemicals, metals, wood, and food. Food processing and oil refinement are secondary industries. Water shortages are a serious problem in some areas and the major cause of migration to the large cities. Water shortage has a negative impact on sectors such as energy, forestry, recreation, tourism, and agriculture. Climate change affects transportation, exploration, and other sectors. New methods of soil conservation, water management, and irrigation have been implemented to deal with the negative consequences of water shortages.